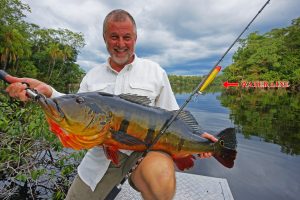 It took me some time to learn and even some failed fishing trips to the Amazon basin early on the beginning to really assimilate the concept. Why? Simply because I failed to understand that nature, as the one I am enjoying now, in its purest form, has its own dynamics and logic. Certainly, it does not always coincide with your needs or expectations and certainly it does not adapt to them. It is rather the other way around.

A successful fishing trip to the Amazon basin can be measured in many ways, but the core of the trip is having fun, and fun is to fish as many peacocks as you can and catch them as big as they get. Having said that, the next question is what should I consider to maximize my chances of having fun.

Everyone I respect having some experience to share in this kind of sport-fishing coincides:

Proof of how high the water levels reach off-season is the fact that the ants don´t build their nests at ground level, they build them on the tree branches. Actually one of my first stupid comments regarding the number of beehives …

amazon fishingflooded amazonamazon peacock bass fishingFirst time you arrive to the jungle you feel an overwhelming sensation of humility and insignificance upon the vastness of this raw landscape teaming with wildlife. The basin is absolutely enormous, and considering Manaus as the center, water levels will be optimum downriver at the beginning of the season in August e.g. the Marmelos river and impossibly high upriver e.g. Itapará river which finds its optimum moment in January/February. Each month in the Season has a determined area with optimum water levels in a pattern that repeats itself season after season with some variations that may be caused by known climatic influences like La Niña current.

All things considered, it is essential that wherever you go in the Amazon basin to fish, it presents adequate water levels. Most serious outfitters fish on third level tributaries of the Amazon, some in public places and some in privately leased rivers. All try to avoid overfished and depredated areas, unfortunately more and more common each day. Each of these rivers enjoys adequate water levels for our purposes only for 8 to 12 weeks per season (Peacock bass season runs from late July to early March – abt. 32 weeks).

Anglers face three lodging options to consider when coming to the area.

After a very tiresome and productive day, over some fantastic caipirinhas, our fellow fisherman Chad recommended the following site and article regarding the Amazon basin water levels which I in turn recommend since it provides great background material for the above discussion, and the site is fantastic in its own right offering a trove of fascinating information. Enjoy! 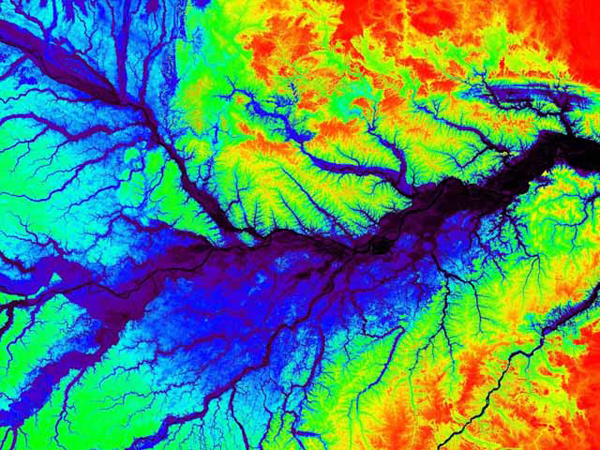 FLOODING, LOW WATER, AND HIGH WATER LEVELS IN THE RAINFOREST

Seasonal flooding is characteristic of many tropical rivers, although few compare to the so-called igapo (swamp forest) and varzea (flooded forest) of the Amazon River Basin, where large tracts of rainforest are inundated to depths of 40 feet during seasonal flooding. The lowest flood stage occurs in August and September, while the highest stage occurs in April and May. Tributaries that drain the Guyana Shield flood in June, while the tributaries that drain the Brazilian Shield flood in March or April. Since the peak rainy seasons are out of phase, the peak discharges of left bank (Guyana shield) and right bank (Brazilian shield) rivers are somewhat offset, having the effect of moderating high and low water levels on the main stream, but tributaries can have extreme variations.

Rain and snow that fall in the Andes and other highland areas reach the Amazon through its tributaries and produce the high-water season. Deforestation of foothills and upper basin may have caused a shift in rain levels during certain times of the year resulting in irregular high and low river levels.

The contrasts between the low- and high-water season in some areas of the Amazon Basin are extreme. Low water leaves vast islands and sand bars exposed and river banks high above water level. Smaller tributaries may become so shallow that travel by dugout canoe is barely possible only when travelers push the canoe. Creeks and streams, which are raging torrents when rainstorms come, may dry up altogether.

Low water is a time of troubles for most Amazonian fish and a time of plenty for predators like arapaima, large catfish, dolphins, and jaguars. With the dramatic decrease in water area, fish become trapped in tiny lakes and river shallows and are easy targets for predators.

In the floodplains, which during highwater are a continuous stretch of water, bodies of water are reduced to floodplain lakes. These floodplain lakes are packed with fish and predators, and dissolved oxygen levels are sharply reduced. During a few weeks each year, massive die-offs are caused in these pools when cold Antarctic air passes over parts of the Amazon, cooling surface waters and causing them to sink to the bottom. The bottom of floodplain lakes is often a decaying anaerobic layer of organic sludge. As surface waters sink to the bottom, methane and hydrogen sulfide from the bottom pushes toward surface causing tremendous die-offs. Vultures crowd by thousands to feed on carcasses.

Many fish have adapted to lack of oxygen by developing structures that enable them to take atmospheric oxygen from the air. Most famous are the lungfish of South America, Africa, and Australia, but many catfish, labyrinth fish, and loaches also are able to directly use atmospheric oxygen.

The best-known predator of floodplain lakes is the arapaima or piracucu, one of the world’s largest freshwater fish. The species attains a maximum of 16 feet, though today such large individuals are extremely rare because of overfishing. Today conservation efforts are focused on restoring this magnificent species.

The anaconda is also an apex predator in floodplain lakes.

High water is the time of the flooded forest when water levels rise 30 to 40 feet and flood the surrounding forest and floodplains, linking river branches as one massive body of water. The higher water level makes the lower canopy accessible by boat. Many tree species depend on the floods for seed dispersal through animal or mechanical (floating downriver) means. It is a time of abundance for most herbivorous fish which can feed on the fruit and seeds that fall from fruiting trees. The Amazon is home to the vast majority of fish species dependent on fruits and seeds.

One famous fruit-eating fish is the tambaqui, a large fish that crushes fallen seeds with its strong jaws. The tambaqui waits beneath trees that are dropping seeds, congregating especially under its favorite, the rubber tree Hevea spruceana, which is widely scattered in the flooded forest. Humans take advantage of the tambaqui and other fish that wait for fallen seeds by imitating falling seeds using a pole with a seed attached by a line. When the fish is attracted within range, the hunter harpoons it. In Amazonian folklore, it is said that the jaguar hunts such seed-eating fish using its tail to mimic the “thud” of falling seeds.

The high-water season is a difficult time for fish predators. The increased water area gives potential prey a larger range and predators must rely on their fat stores from their heavy feeding during the dry season. Many omnivorous species eat mostly seeds and fruit during this period.

High water also means difficulty for ground-dwelling plant and animal species. Many ground dwellers migrate to more elevated areas, while some species move up into the trees. Understory plants and shrubs may spend 6-10 months underwater where they are thought to continue some form of photosynthesis.

Research published in 2005 found that flooding in the Amazon causes a sizable portion of South America to sink several inches because of the extra weight and then rise again as the waters recede. Scientists say that this annual rise and fall of earth’s crust is the largest ever detected, and it may one day enable researches to calculate the total amount of water on Earth.